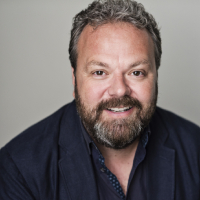 Hal Cruttenden is a seasoned comedian, actor and writer.His credits stretch from Eastenders and The Madness of King George all the way to The Rob Brydon Show and Orwell, a Celebration in the theatre. Hal is unashamedly suburban, by his own admission teetering on the edge of a mid-life crisis. According to The Scotsman ‘he takes the personal and the ridiculous, and whizzes them into a delicious comedy smoothie that’s sweet with a hint of sharpness.’ His camp delivery belies his status as a married man and a father, all of which is on show when it comes to patio furniture and oneupmanship with the neighbours. Hal has appeared on The Royal Variety Performance, hosted Live at the Apollo and performed stand-up almost everywhere from Belgium to Bahrain - winning rave reviews at Montreal’s Just For Laughs. He also danced to Destiny’s Child’s Bootylicious for Let's Dance For Comic Relief, taken on the Sports Relief Sailing Challenge, and was the guest comic for the final Great British Bake-Off: An Extra Slice.